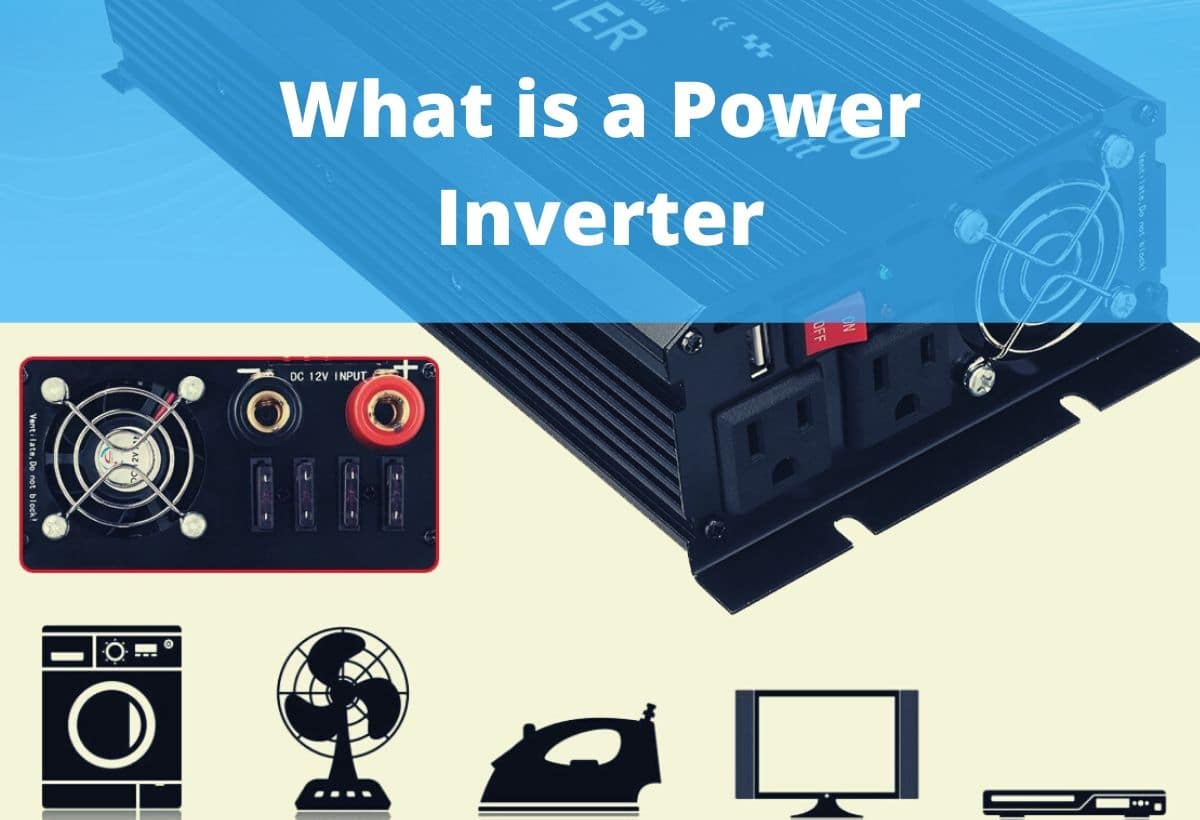 The earliest power inverter was quite complex electromechanical devices. They used magnets and moving parts to transduce direct current power into alternating current electricity. Modern power inverters use oscillator circuits made up of transistors and semiconductors rather than expanded moving parts.

It is difficult to trace who exactly coined the term “power inverter,” but it dates back to 1925 article in the GE Review called “The Inverter,” in which the author David Prince outlined the essential functions of the device.

What is a Power Inverter?

What Is A Power Inverter Used For?

A power inverter, as mentioned above converts direct current electricity to alternating current which helps in operating all kinds of daily use electronic devices. Some good examples will be kitchen appliances, electrical lights, power tools, TVs, microwaves, computers, etc. A power inverter is used as a storage center for portable power; you can just plug it into the battery, store the energy, and then connect it with your AC equipment. The invertor’s battery needs to be recharged from time to time to keep using it in the time of need.

What Size Power Inverter Do I Need?

By definition, an inverter is a device that converts DC (Direct Current) electric power to usable AC (Alternating Current) power. With the help of an inverter, one utilizes the power generated from a battery for running common household devices if the traditional AC sources are unable to function.

Inverters have proved to be useful as an emergency backup in case of power shutdowns. These are incredibly flexible, portable, and versatile devices and can be implemented in several places.

For instance, you could use an inverter in your home in case of failure of power, or you could use it as a portable power supplying device for a camping trip.

However, it is necessary to identify the kind of inverter that best suits your needs. For instance, if your requirement of an inverter is limited to charging your laptop and cell phone, buying an overpriced and expensive inverter that is meant for running refrigerators and heating systems would be a poor decision.

What Are The Different Types Of Power Inverter?

A sine wave inverter is the one that you can easily find in your local utility store along with a generator. This is because the sine waves are a natural product of rotating AC machinery and they are generated by doing the same. The major advantage of having this invertor is that a majority of equipment in the market are designed for sine wave. However, it is also well known that sine waves investors are always on the higher end of the money spectrum.

These inverters come at the lowest end of the spectrum in terms of pricing when compared to the other two. The output waveform of these inverters is square type. Usually, these inverters are the least used ones as most of the equipment is compatible with the sine wave inverter. This inverter can be used with equipment having universal motors.

Apart from these two types of inverters, there is another inverter type called square wave inverter. It works differently than both the inverters and as mentioned above is the cheapest out of the lot. These inverters are usually more compatible with the electronic equipment having universal motors.

However, it is advised that you go for a sine wave inverter instead of opting for one of the other two types for a higher level of efficiency, keeping the costing insight, obviously.

Things To Consider Before Buying A Power Inverter

You should gain some idea about what to look for in an inverter before purchasing one. To become aware of some considerations, keep in mind while buying an inverter and tips to buy UPS for home, go through the given suggestions: –

Before venturing out to buy an inverter for your home, it is advised to know the estimate of your total power consumption in advance. Consider any average summer day and enlist what all sources at your home need power to run.

An inverter is very distinct from a generator. It cannot power all the electrical appliances of your house when there is no electricity. You have to select the few essential devices which you want to stay running all through the day, without any hindrance whatsoever!

2. Understand How an Inverter Differs From a Home UPS

A home UPS is quite similar to an inverter considering the functionality aspect. Both the devices are used to convert direct current to alternating current, which then used as a backup option to generate more power.

However, the main difference between an inverter and a UPS (Uninterrupted Power Supply) is that there is no time interval between the devices being powered off at the time of a power cut and being powered back on again subsequently in a home UPS.

However, when an inverter powers these devices, there is a minimum period of total blackout when the electricity is cut. It is only because of this reason that most computers in homes and offices are connected to UPSs rather than inverters. They allow the users to save their relevant data before powering their machines off.

3. Know Which Appliances Can Be Powered Power Using an Inverter

An inverter can be used to power heavy appliances such as fridges and air conditioners. But, the motors of the appliances, as mentioned above, are equipped with compressors that need vast amounts of currents, especially to start up.

Thus, to help such heavy-current-drawing devices, it is advisable to buy inverters that have high VA values and sizes or buy those inverters which are specially programmed to cater to heavy appliances like refrigerators and air conditioners.

VA ratings and watt ratings are to be taken changeably. Devices that we use in our homes such as lights, bulbs, refrigerators, air conditioners, etc. all are the ones that use up power and hence are rated in Watts.

In contrast, power generating equipment such as inverters, uninterrupted power supplies, generators, etc. all are rated in VA. VA is apparent power and is the product of the voltage and the current supplied by the device.

The ideal scenario for both the VA value and the watt value is to be the same. But in actual circuits, it is not practically possible for them to be the same. Do not be deceived by manufacturers into believing that both of them are the same.

They say this a lot to entice the buyers. However, an informed consumer would know this ideal case scenario is not possible in practicality.

With any product, be it a UPS or an inverter, too, you must make sure that the products are controlled and moderated under a specified warranty period by the manufacturer. Inverters are appliances that require almost no maintenance at all until and unless they stop functioning altogether and start showing any abnormal behavior.

Also, they stop working in case there is any problem with the battery. An inverter is not 100% efficient because it consumes a part of the energy it has to power its circuit and run a cooling fan to function smoothly.

Now that you know all the criteria to take care of before buying the perfect inverter, make sure you buy it only from reputed and reliable manufacturers who have an established brand name and are trusted by many. Luminous, Microtek, Su-Kam, and Exide are among the most popular manufacturers of inverters and home UPSs.

With a large number of commercial power inverters flooded in the market, choosing the right one for your requirements might be a tough decision. However, once you have your power needs discerned, you will be able to decide which inverter you require.

Otherwise, you can select a cheaper inverter with a low Watt rating. A pure sine wave inverter will give you the fastest and the most efficient power supply, but a modified sine inverter can be cheaper and better suited for lighter power needs.

The batteries you choose should be efficient enough to meet your overall needs by providing adequate power to supply your inverter as well.

You have to make a rough estimation of your power requirements. Do not forget- Inverter is not a Generator. The inverter has its boundaries and limitations. You cannot power and run all your home appliances with a regular inverter.

If your power requirement exceeds 3000 VA, then one inverter alone cannot fulfill your demands completely. No doubt, a high-power inverter can run your refrigerator and air conditioners smoothly, but not for too long. They have a limit. Here, at any cost, your battery will not last more than a few hours.

Hence, in cases of power requirements for a very long time, it is better to go for a home generator. It can run for as long as you want, provided you fuel it properly. However, if you do not wish to a single minute with power downtime, a power inverter, and an electric generator combination is the option.

Power Inverter Guide is a participant in the Amazon Services LLC Associates Program, an affiliate advertising program designed to provide a means for sites to earn advertising fees by advertising and linking to Amazon.com.